Hey everyone, it's been awhile! While this community is kinda dead the love of groupies and muses is still very much alive! I wanted to share this awesome new podcast my friend Chanty has created called Muses and Stuff. Please go check it out and show your support on facebook and itunes! I just recorded a new episode with her about Marianne Faithfull and am really looking forward to hearing who she decides to cover next and join her again with more rock n roll stories.

Telegram sent by Eric and Charlotte: 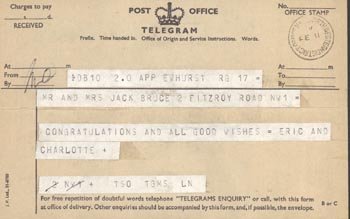 ( Collapse )
It's not a doubt that Bebe is a style icon and pop culture legend.
Once again, she is the image of a book cover, this time Brad Elterman's book of his photos:

Dog Dance is the new photographs book by Brad Elterman, featuring the iconic photo of Bebe and Stiv on the cover It will be published fall 2013. He says: "The cover of my new book, “Dog Dance” designed by the amazing Sandy Kim! Published by Damiani and out this fall. Foreward by my pal Olivier Zahm. It’s gonna be a cosmic summer!" From http://bradelterman.tumblr.com

1979, October - The famous shot of Bebe & Stiv by Brad Elterman, at a party for Blondie at Firoucci in Beverly Hills to celebrate their new record, "Eat to the Beat". He remembers: "I clipped this rare photo of my friends Bebe Buell and Stiv Bators from early proof sheet." From http://bradelterman.tumblr.com
Brad remembers in his website (bradelterman.com): "This photo was taken at an incredible party at Fiorucci's store in Beverly Hills. I think KISS, tons of stars and beautiful girls were present. Fiorucci's was known for its outrageous fashions and fun parties, as well as the punks who worked there. Bebe had been living with Todd Rundgren and was at many happening parties. Think of Elvis Costello's "This Year's Model," written when he was dating her. Stiv Bators was the lead singer of the Dead Boys. Interesting how celebrities attract. FYI Bebe is the mother of Liv Tyler. Stiv was hit by a car in Paris, refused to go to the hospital, and died in his sleep."

( Collapse )
Now you can also find us on Facebook, Blogspot and Tumblr

I have been scouring the internet for this documentary online and have not been able to find anything outside a deleted YouTube video. I would be totally fine paying for it but there is no place to do so. Any leads?

Earlier this summer I decided to write Pamela Des Barres and tell her how she needed to come to Toronto for a writing class because I obviously was dying to go to one and LA is just to far away. The amazing thing is she said she was all for it if there was enough ladies to fill one. Luckily I know a lot of dolls who are just as in love with Miss P as I am because I put a group together and if you can believe it Miss P is on her way to us next week!!! I'm so excited! My good friend also set up a Book Reading/Signing at a local record store while she's in town! I don't know if there are any other Toronto dolls in the group but if there are here's the details...


I'll post in here after about meeting Miss P and taking the workshop. I just thought I'd post in here in case anyone could make it down or wanted to share it with others who might want to!


Has anyone else met Miss P or taken her writing class?